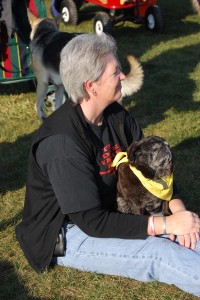 It has been a tough year for family and friends- illnesses and injuries in two, three and four leggers.  But here we are, everyone healed up, or healing, the only loss was Maggie.

But I don’t want to spend this post on the bad stuff.  I chronicled Maggie’s health issues in the forums.  I wrote about our good-bye the day I let her go.  While I have shed my share of tears since last June, I can say that most of the time now I remember her with smiles and laughter, and I enjoy telling people about her and how she beat cancer (at least the first one).

Maggie was NOT what I would call the ‘Boy Scout’ type of dog, you know- strong, brave and loyal.  She was as obstinate a pug as I have ever met.  She did not do things to please me, she did not do things because I praised her.  I laugh when dog trainers say praise works as a reward… obviously they have never tried to train a pug!!  She was very demonstrative- especially when she was unhappy with me.  She would sit with her back to me to show me she was unhappy, and if I tried to pet her she would duck away from my hand.  When I traded in my truck and bought a small SUV I wouldn’t let her  ride in the front seat anymore. She had always ridden in the from seat of the truck, usually standing and leaning against the seat with her front paws on the armrest on the door.  But by then I had two pugs and I needed more room, and room for at least one passenger.  I always had the back seats down so the pugs had the whole back.  When I wouldn’t let Mag get in the front seat anymore she was mad for a month!  She would sit in the back of the SUV with her back to me and pout. 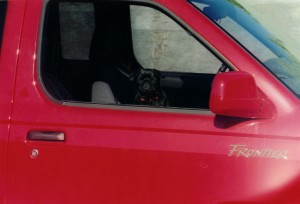 Maggie was not at all adaptable, she didn’t like changes to her routine (see previous paragraph).  She didn’t like it when we moved to a new house.  She hated the mud room with the linoleum floor, she refused to walk on it.  Because she was not adaptable I was really worried when we did the amputation.  I was afraid she would have a hard time adapting, and I was right.  She took a couple of months to act like she wasn’t mad all the time.  Mag had her amp about 2 months before our founder and CFO Jerry so Tripawds was not here to help us.

She also had always spun in a circle before she would poop.  I think that was one of the hardest things to watch after her amp- watching her try to spin and fall down.  She would sit there and look at me with a pitiful, woe is me look on her face and I felt so bad.  She didn’t poop for 5 or 6 days after her surgery.  Conventional wisdom says that is because of the pain meds, but I know it was because without the centrifugal force from the spin nothing would come out.  Luckily she kept her right back leg, and liked to spin to the right- so on about day 6 she figured out the spin and poop!

And then there was the stroller.  I had tried to tow her around in a wagon when she was younger but she hated it and would always jump out.  I got a stroller for her after her amp because I knew she needed to get out, but I wasn’t sure how far she would be able to go.  I was sure it would be weeks or months of trauma trying to get her to tolerate it.  But she took to it right away! She rode with sort of an entitled look on her face, if she could have waved her paw she would have looked just like the Queen in a parade. 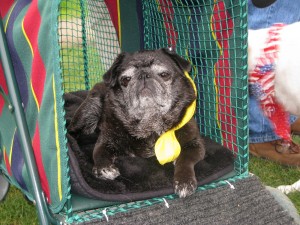 And there were those odd things about her… how she would diligently walk around puddles on the path leading to the creek, then wade in up to her chest! 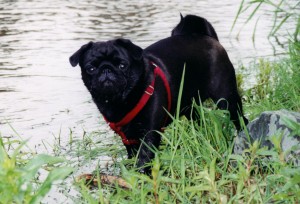 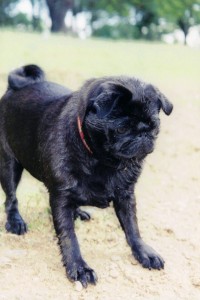 Or how she would act like she would take on horses or cows, but was terrified when she got a leaf stuck to her paw. 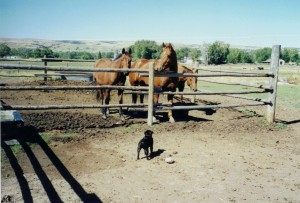 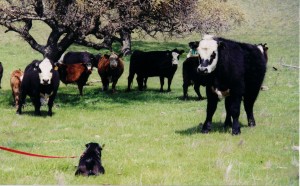 I loved how she would let me hold her like a baby- she would put her chin on my shoulder.  Or sit on my left arm and just get the lay of the land.  It was much easier to do this after she lost her leg- less bulk in the back end! 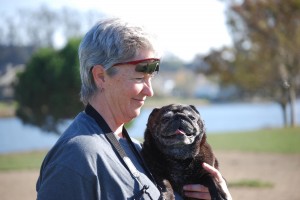 I adopted Obie last July, another black pug, and I  have Mag’s little sis Tani,  so I still have two black pugs.  A year later I still sometimes call the pair of them ‘the girls’.  Actually lots of people do it- my dad does, friends at the park, even the vet techs sometimes say it.  Maggie and Tani were called ‘the girls’ for 9 years, so it’s a hard habit to break.  Besides, Obie isn’t the most manly of pugs…

I was really proud of her when she finally adapted to being a Tri-Pug.  I was surprised when she beat mast cell cancer.  And I was so inspired by how she just kept going those final 3 months.

Maggie made it to her 11th birthday too.  11 isn’t really old for a pug, but given that I didn’t expect her to make it much farther than her 8th birthday I feel fortunate that we had so much time together. 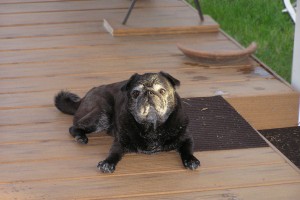 I have the tangible things- the blanket she slept with almost every night of the 11 years she lived with me, the loop from her harness on my key-chain, the Tripawd Power bandanna she wore, the Mag Tag hanging on my bedroom wall, her leash and collar hanging in the closet with the fairie wings. 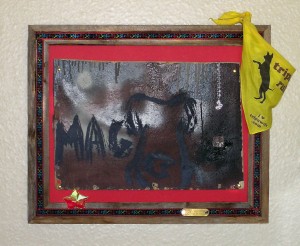 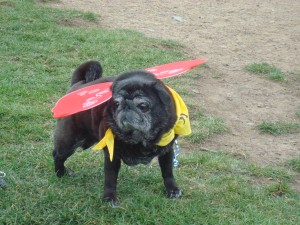 And there are little reminders everywhere- the tooth marks on my cell phone case from our last weekend together, the toys still in the toy box, and I swear some of the black pug fur that swirls through my life must be hers! 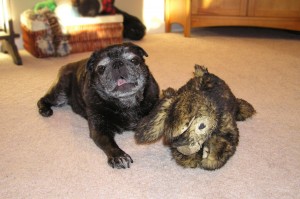 But the knowledge and insights I gained from our time together is what I treasure most, I wrote about it last October.  I will steal from myself because I can’t think of a better way to say it:

So today, four months after saying good bye, I say thank you to Maggie.  Because our 4.5 year cancer battle taught me to ‘be more dog’.  Because our  last three months together showed me that there can be quality when life is not perfect.   Because I am stronger, more optimistic, and more able to cope with adversity than at anytime in my life.

Because I  have found a reason for our journey together.

I miss you Spud. 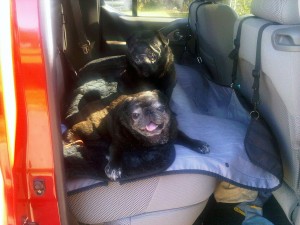 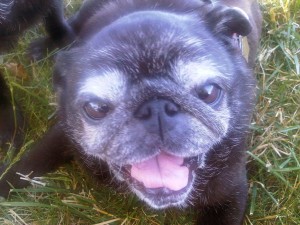 10 thoughts on “One Year Later”