This is Maggie’s little sister Tani: 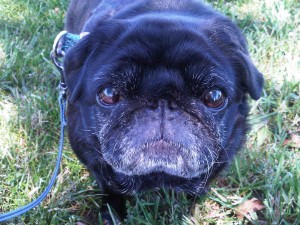 Tani is almost 10 years old, and is missing her big sister.

We said good bye to Maggie two weeks ago and marked the occasion with a trip to the vet.  Just routine stuff, we got a little behind on Tani’s vaccinations over the past three months.

I am trying to decide how Tani is doing.  She has never in her life been an only dog for this long, her previous mark for being alone was six days.  For some parts of the day she seems fine, for some I am not so sure.  She is still very clingy most of the time, always right by me.  Then sometimes I don’t see her and after looking I find her laying somewhere where neither of them used to lay. Sometimes she looks sad to me, but that is probably me projecting my silly human emotions on her.

She tends to be very poky on walks- I told her the other day that she was slower than a three legged pug… but I’m not sure if she is missing Mag, sore, or just bored. Tani has her own host of medical issues, including arthritis in her back, epilepsy caused by hydrocephalus, inflammatory bowel disease, and the normal suite of pug stuff, including eye issues.  She actually does really well, if you didn’t know her history you would never suspect she has all these problems.  She is a happy girl who loves her squeaker toys and food.

Lots of thoughs and emotions over the past two weeks.  I really want to get them written, but when I sit down here my fingers don’t work so well.

So for now here are a couple of pictures from what turned out to be our last weekend together.

Sharing a stick at the park. 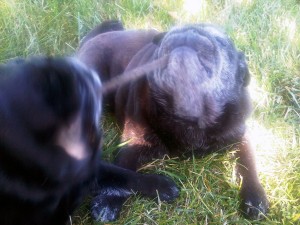 In the truck, ready to go home. 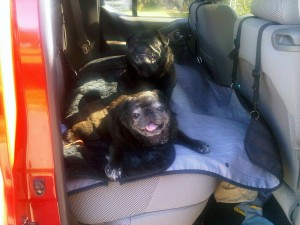